by Solutions Northwest | May 12, 2017 | Ergonomics Solutions 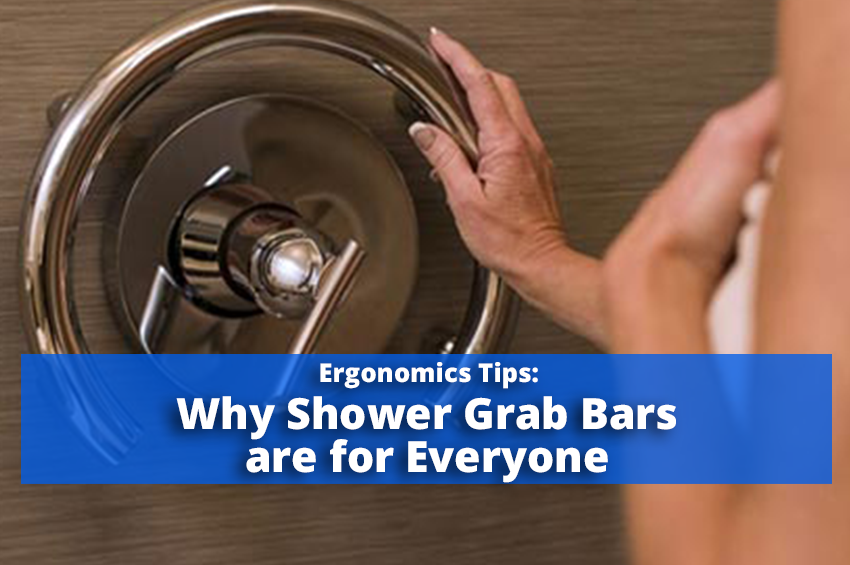 I used to think grab bars in the shower were just for the elderly and disabled. I’ve changed my mind. Grab bars are a good idea to have in every shower. The number of pro athletes who have been injured by falling in the shower goes to show that even if you are in peak physical condition, it can happen to you.

Reds’ Raisel Iglesias injured back and elbow in shower | MLB.com

Falcons’ Tevin Coleman is in the league’s concussion protocol. The rookie third-round pick slipped in the shower Wednesday at the team facility.

That’s not even a complete list of all the pro players who have been injured by slip and fall accidents in the shower.

When we first bought our house, we did some major remodeling. One thing I wanted to do was take out the institutional looking grab bars in the guest bathroom’s shower. The contractors told me I would have to re-tile the entire bathroom to do it, so I decided to leave the grab bars in there for now and just put up a shower curtain. Below is a picture. Architectural Digest, it is not.

As I lived with this grab bar situation, I realized that while it was not attractive, it had some perks. I could hang a wash cloth on it like a towel bar. I could put a bottle of dog shampoo on the bottom bar while my dog was wiggling around and trying to escape. If I started to slip in the shower, I could grab it to stop a fall. If I did fall, I could pull myself back up with it. If I wanted to stay in this house as I age, like the Age In Place movement promotes, it’s a smart idea.

I started thinking that I liked having grab bars in showers, I just didn’t like how the grab bars in my shower looked. Manufacturers must have caught on that people like me wanted attractive grab bars, because there are great options available now. Many new models of grab bars look like towel bars, shelves, and shower door handles. They come in finishes to match existing bathroom fixtures such as chrome, nickel, and ORB. They look nothing like the institutional grab bars which are in my shower.

With new grab bar designs, a safe shower can look like it came from the pages of House Beautiful. There are other safety considerations such as the best way to install grab bars and the slip resistance rating of tiles, but I’ll save that for another day.

P.S. The funniest sports injury I came across while researching for this article was from Steve the Ump’s List of Strange Sports Injuries. “Red Sox rookie Clarence Blethen thought he looked older and meaner if he took his false teeth out when he pitched. He forgot to put them back in his mouth when he was batting. While sliding into second base to break up a double play, his own teeth bit himself in the butt.”

For more guidance on all things Ergonomics, visit SolutionsNW.com or Contact Us for more information.

You have Successfully Subscribed!